Your Guide To Doctors, Health Information, and Better Health!
Advanced Search
The following article was published in Your Health Magazine. Our mission is to empower people to live healthier.
By Jacqueline Griffiths, MD 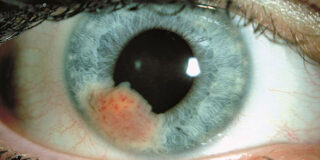 Cancer of the eye is a malignancy that starts and grows in your eye. A malignancy is a group of cells that are cancerous (non-typical cells that grow quickly and uncontrolled) and that can spread to other sites in the body or invade and destroy tissues.

The most common cancer of the eye is melanoma, also known as ocular melanoma. Melanoma is a type of cancer that develops in the cells responsible for producing the pigment that gives your skin, hair and eyes color. Just as you can develop a melanoma on your skin, you can also develop it in your eye. Although it is the most common type of eye cancer in adults, ocular melanoma is rare.

Ocular melanoma also known as uveal melanoma because it usually develops in the part of the eyeball called the uvea – a layer in the eye wall between the sclera and retina.

Melanoma nearly always develops in the part of the uvea called the choroid, a pigmented layer lining the eyeball, because choroid cells have the same kind of pigment as cells in skin. While most ocular melanoma begins in the choroid, a smaller number develop in the iris (also a part of the uvea), which is the colored area around the pupil.

Melanomas in the iris usually grow slowly and generally don’t spread to other areas of the body.

Primary intraocular lymphoma (lymphoma of the eye) is a kind of cancer that involves the body’s white blood cells, or lymphocytes, located throughout the body. Lymphomas can also start in organs such as the lungs, stomach, and rarely, the eyes.

A different kind of eye cancer, called retinoblastoma, affects young children. Caused by a genetic mutation, it begins in the retina, the light-sensitive tissue lining the back of the eye. Retinal nerve cells begin to grow and multiply, then usually spread into the eye and possibly other parts of the body.

Other types of cancers can affect the eye. Orbital cancers affect the tissues surrounding the eyeball (called the orbit), including muscles that move the eyeball around and nerves attached to the eyeball. Adnexal structures are other parts of the eye called accessory structures, and include the eyelids and tear glands. Cancers that develop in these tissues are called adnexal cancers.

Annual exams with a Board Certified Ophthalmologist are recommended for the maintenance of healthy vision.