Your Guide To Doctors, Health Information, and Better Health!
Advanced Search
The following article was published in Your Health Magazine. Our mission is to empower people to live healthier.
By Howard Horowitz, DPM 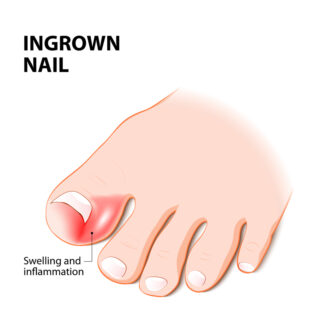 The ingrown nail involves the production of an abnormal corner nailplate. This growth presses upon the soft tissues and causes pain, inflammation and finally infection.

The first toe is the one most commonly affected, though the smaller toes may also be involved. Congenital factors such as an unusually wide nailplate or excessive curvature of the nail often play a role in the development of such problems. Other predisposing factors include tight, poorly-fitting shoes or trauma to the nailplate, often from sports involving a lot of stopping and starting. Poking at the nails or using improper cutting procedures are habits that also pose risks.

If you look at one of your nailplates; you can see that the nail comes out of a fold of skin (cuticle) and that it actually has a deep root from which it grows (the matrix). Specialized cells at the base of the matrix produce the hard protein substance of the nail. This is very similar to hair in its composition. If injured or irritated these cells produce a deformed nailplate. This can eventually result in a recurring ingrown nail.

Usually, when an ingrown nail is diagnosed, the offending portion of the nailplate (generally one of the corners) is removed. The nail will regrow in one of two ways after a period of 3-4 months. Normal growth will, of course, require no further treatment. If it becomes ingrown again, permanent correction is in order.

This procedure, done comfortably in the office, involves local anesthesia, after which the offending portion of the nailplate is removed – right down to the root. Next, a chemical is applied to the root to cauterize the matrix cells. This ends the production of nail along the side of the nail and prevents the development of an ingrown nail. The remainder of the nail is not affected. No stitches are needed and only a small bandage is applied.

Post-operative care requires daily wound cleansing for about two weeks, but pain is minimal and regular activity and shoewear are only minimally affected. There is usually no time lost from one’s daily routine.

Additionally the possibility of recurrence is small, making this a comfortable and permanent correction for this common problem.