Your Guide To Doctors, Health Information, and Better Health!
Advanced Search
The following article was published in Your Health Magazine. Our mission is to empower people to live healthier.
By Joyce Abramson, RNMS 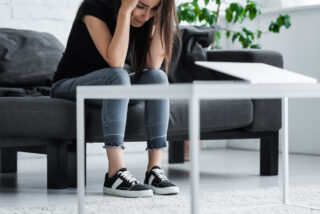 Imagine you are in an elevator and suddenly you feel flushed and short of breath. Your heart is beating rapidly and you begin to perspire. What’s happening?

What could be occurring is a panic attack. Panic attacks involve an uncontrollable feeling of panic in response to ordinary non-threatening situations. Chemical or hormonal imbalances, drugs/alcohol or stress can precipitate attacks, which frequently can be mistaken as heart attacks or breathing problems.

Symptoms often appear suddenly without apparent cause. Racing/pounding heartbeat, chest pain, dizziness, nausea, shortness of breath, tingling/numbness in hands, a sense of terror or losing control have been described as symptoms experienced during panic attacks. Typically, attacks last several minutes but can be longer. When someone has repeated episodes or feels great anxiety over the possibility of re-occurring attacks, it is diagnosed as panic disorder.

Approximately three million people have a panic disorder at some time during their lives. Women seem to be affected twice as often as men.

Once a panic attack occurs, irrational fears may develop about the situation and the person may avoid similar circumstances i.e., panic while driving over a bridge may lead to a person refusing to drive over any bridge.

According to the National Institutes of Health it is reasonable to believe that there is some biological basis for panic disorder. Theories propose that there may be a malfunction or hypersensitivity in the autonomic nervous system. Initial attacks can be triggered by a physical illness, major life stress or medication side effect. Caffeine or alcohol can also trigger panic symptoms in some people.

Treatment should rule out other somatic illnesses. A combination of medication and a type of therapy called cognitive behavioral therapy often are successful in treating panic disorder. In treatment, the person is taught ways to decrease anxiety, techniques to refocus attention, or breathing exercises. Exposure to the fearful situation may slowly desensitize the person and relieve symptoms. The use of anti-depressants and anti-anxiety medications have been shown to help prevent panic attacks or reduce their frequency.

With effective treatment there is a good recovery rate, 75-90%, in a relatively short time frame. Having the support of family and friends during treatment can enhance the effectiveness of treatment and decrease anxiety related to the possibility of the panic attacks recurring.