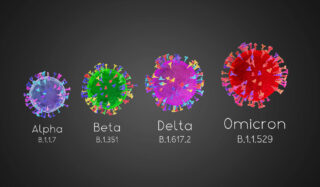 Any Virus Will Mutate and Continue To Produce Variants

One thing everyone must understand and should know already is that viruses mutate and produce variants. Those variants must be addressed either through vaccines or treatments, and most likely both.

SARS-CoV-2, the virus that causes COVID-19, has now produced another variant which is creating havoc worldwide. Omicron is the latest edition of the virus leading to shutdowns and re-evaluation of where we stand.  At the same time the therapeutics from Merck and Pfizer are producing enough skepticism to make people worry about them, too.

From the time of the H1N1 pandemic in 1918 the influenza virus has been producing variants each year, and that’s why we need to get a flu shot every year. This is nothing new but many people may not understand it. HIV, the virus that causes AIDS has so many variants I don’t think there is an accurate count. There are actually several “groups” of HIV variants.

If you study virology and genetics a little, you will find that virtually all animals and viruses mutate, then recombine to form variations of themselves. Humans evolved in the same way in the process called natural selection.  Really, anything with a genetic code will mutate and form variants or more advanced versions of themselves.

A virus, like CoV-2 replicates so fast and so many times it’s inevitable that it will mutate and replicate the mutations which then are dangerous variants of the original virus. In the case of CoV-2, there have been as many as 50 mutations identified in the RNA that forms the capsule and system by which the virus is injected into cells. Those mutations are of particular interest because that is where the vaccines are designed to attack the virus. The vaccines essentially make it much more difficult for the virus to enter your cells, which lessons its effect.

Everyone by now is familiar with the term breakthrough infection because we are seeing a lot of it. But, we are also seeing those people infected are not getting as sick or dying, unless they have other health problems that weaken their immune systems.

CoV-2 is really following the natural course of any virus, spawning variants that have to be studied and combatted. People, I’m here to tell you, COVID is not going away, probably ever, but the level at which we can fight it and protect ourselves from it advances every day.

I wonder at what point governments around the world will begin treating this virus similarly to the way we treat the flu and other viruses we have encountered over time. There has to be a point where we get to where it is an “acceptable” danger. Who knows!