Your Guide To Doctors, Health Information, and Better Health!
Advanced Search
The following article was published in Your Health Magazine. Our mission is to empower people to live healthier.
By Thomas K. Lo, MA, DC 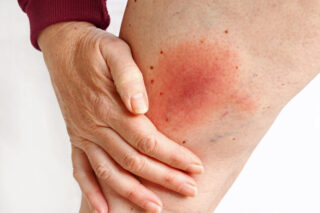 Lyme disease is caused by the bacterium Borrelia burgdorferi and is transmitted to humans through the bite of infected blacklegged ticks.

What Are the Symptoms of Lyme Disease?

Early signs and symptoms of Lyme disease (3-30 days) after a tick bite are fever, chills, headache, fatigue, muscle and joint aches, and swollen lymph nodes. The erythema migrans (EM) rash occurs in approximately 70-80 percent of infected persons with Lyme’s beginning at the site of a tick bite after a delay of 3-30 days (average is about seven days). It expands gradually over a period of days reaching up to 12 inches or more across. Sometimes it will clear as it enlarges, resulting in a target or “bull’s-eye” appearance.

Later signs and symptoms (days to months) of untreated Lyme infection include severe headaches and neck stiffness, additional EM rashes on other areas of the body, arthritis with severe joint pain and swelling, particularly in the knees and other large joints. More symptoms are facial palsy, intermittent pain in tendons, muscles, joints, and bones, heart palpitations or an irregular heartbeat, episodes of dizziness or shortness of breath, inflammation of the brain and spinal cord, nerve pain, shooting pains, numbness and tingling in the hands or feet and problems with short-term memory can occur at later stages.

A few things to note about Lyme’s are that a small bump or redness at the site of a tick bite that occurs immediately and resembles a mosquito bite is common. This irritation generally goes away in 1-2 days and is not a sign of Lyme disease.

A rash with a very similar appearance to EM occurs with Southern Tick-associated Rash Illness (STARI), but is not Lyme disease.

Ticks can spread other organisms that may cause a different type of rash.

How Do Ticks Transmit Lyme Disease?

The blacklegged tick (or deer tick) spreads Lyme disease in the northeastern, mid-Atlantic, and north-central United States. The western-blacklegged tick spreads the disease on the Pacific Coast.

Ticks attach themselves to any part of the body and are often found in hard-to-see areas, such as the groin, armpits, and scalp. In most cases, the tick is attached for 36-48 hours or more before the Lyme disease bacterium can be transmitted.

Most people are infected through the bites of immature ticks called nymphs. Nymphs are tiny (less than two mm) and difficult to see; they feed during the spring and summer months.

Adult ticks also transmit Lyme disease, but are much larger and are more likely to be removed before they have had time to transmit the bacteria. Adult deer ticks are most active during the cooler months of the year.

Next month’s article will discuss ways to limit your exposure to ticks.