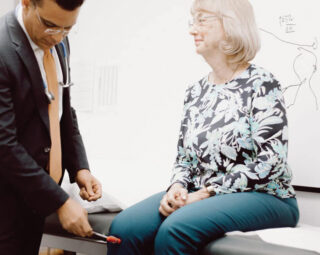 Alzheimer’s disease starts with mild memory loss. What if there was a pill to prevent the disease from getting worse?

Studies of an investigational drug are underway to see if it may be effective in slowing the progression of Alzheimer’s disease in people who carry two copies of a certain gene (APOE/4) that increases the risk of developing it and other dementias.

While one in four people carries one copy of the gene, only 2 to 3% of the population carries two, and hence are at greatest risk.

Results in a small, ongoing phase II trial of the drug in early Alzheimer’s patients with two copies of the gene showed “significant improvement” on memory tests after six months, according to Alzheon, a Massachusetts-based company developing it and a number of potential drugs for Alzheimer’s.

Phase three clinical trials of the drug, named ALZ-801, are getting underway. These constitute the final step before the FDA reviews the drug for possible approval. The company’s nationwide study is called ApolloE4.

In our area, people can participate in the study via Re:Cognition Health — a clinic in Fairfax, Virginia.

Anyone age 50 to 80 with a diagnosis of mild cognitive impairment (memory loss) is eligible to volunteer. Free genetic testing and testing for Alzheimer’s will be done, and participants will be reimbursed for their time.

Participating is also an opportunity to help future Alzheimer’s patients, pointed out Monica Bland, operations manager at Re:Cognition Health. “They would be contributing to science and helping people in the future,” Bland said.

Half of participants will receive the study drug, and the other half will receive a placebo. Each will take one pill in the morning and one in the evening.

The drug has already been proven safe in phase 1 trials. It has been well tolerated in studies so far when taken twice a day with food. Alzheon is hopeful the treatment will eventually save millions from suffering from Alzheimer’s disease.

Currently there are no approved drugs that stop or prevent the clinical decline typical of Alzheimer’s disease.

“Our end goal is to help patients [by providing] other options for Alzheimer’s disease medications, because there is not much out there,” Bland said. “The FDA-approved drugs aren’t doing much.”