Deion Sanders has “Time Bomb in His Leg” ­– Loses 2 Toes 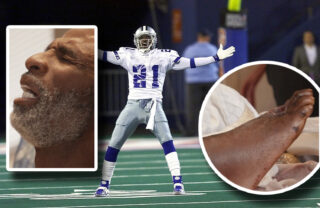 Most football fans, and sports fans in general are probably aware that former NFL star Deion Sanders had two toes amputated after blood clots in his left leg caused circulation problems and lack of oxygen to his extremities. The doctors indicated that the muscles became compartmentalized. This causes pressure to build on the muscles, fascia, arteries and veins cutting off adequate blood supply.

He had routine foot surgery to repair a dislocated toe, but that should not have contributed to this more serious condition causing him to lose his toes.

Without the proper blood circulation the tissue begins to die and gangrene sets in requiring amputation in order to save as much as possible, and preserve life itself.

His mother revealed later that there is a family history of blood clots which undoubtedly contributed to the dire situation. Being genetically predisposed to blood clotting, or any health condition, makes it more likely something like this will happen. The doctors stated that the routine surgery and other factors should not have caused this situation and there had to be other contributory factors like being genetically predisposed.

People should take this seriously. When we look at the whole situation it should tell us to pay more attention to our health and what’s going on. One has to wonder if there weren’t signs of blood clotting, whether pain or weakness, or something else which should have alerted Sanders that something might not be right with his leg, and health.

The doctors described it as a potential “time bomb” in his leg. So, one question is, Were there any signs or symptoms in advance of the routine surgery?

To have knowledge of your family history could make all the difference in the world when it comes to something like this. With that in mind, it should make a person pay closer attention to what might happen so if there are symptoms, they can address them early rather than waiting until the situation is out of control and potentially life-threatening.

It is up to each of us to pay attention to our bodies and be our own health advocates. The more information you have and the more proactive you are, the better off you will be.