Your Guide To Doctors, Health Information, and Better Health!
Advanced Search
The following article was published in Your Health Magazine. Our mission is to empower people to live healthier.
By Janet V. Johnson, MD 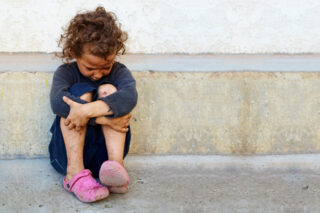 It is estimated that one in five U.S. children lives in poverty, and poverty is an important determinant to a child’s overall health.

Children being raised in poverty (defined as income of $24,036 or less in 2015, for a family of four with two children) are at a higher risk for a wide range of problems.

Poorer children and teens are at a greater risk for several negative outcomes such as poor academic achievement, school dropout, abuse and neglect, behavioral and socioemotional problems, physical health problems, and developmental delays.

These effects are compounded by the barriers that children and their families encounter when trying to access physical and mental health care.

Poverty has an adverse effect on the academic outcomes of children, especially during early childhood. Research shows that 40% of children living in poverty aren’t prepared for primary schooling.

Living in poverty with chronic stress has been shown to adversely affect children’s concentration and memory, which may impact their ability to learn. Children that live below the poverty line are 1.3 times more likely to have developmental delays or learning disabilities than those who don’t live in poverty.

Dropout rates of 16 to 24-year-old students who come from low-income families are seven times more likely to drop out than those from families with higher incomes.

Poverty and economic hardship is difficult for parents who may experience chronic stress, depression, marital distress and exhibit harsher parenting behaviors. These are all linked to poor social and emotional outcomes for children.

Unsafe neighborhoods may expose low-income children to violence which can cause a number of psychosocial difficulties. Violence exposure can also predict future violent behavior in youth, which places them at greater risk of injury and mortality and entry into the juvenile justice system.

Children and teens who live in poorer communities are at increased risk for a wide range of physical health problems, such as low birth weight and poor nutrition, which is manifested in the following ways:

They are also at an increased risk for chronic conditions such as asthma, anemia and pneumonia; risky behaviors such as smoking or engaging in early sexual activity; and exposure to environmental contaminants, e.g., lead paint and toxic waste dumps.

There are no easy solutions to reducing child poverty or alleviating its consequences. Research suggests that a combination of parental effort and social programs – correctly designed and implemented – can improve the lives of poor children and their families.

Volunteer your time with charities and organizations that provide assistance to low-income and homeless children and families. Donate money, food, and clothing to homeless shelters and other charities in your community. Donate school supplies and books to under resourced schools in your area.

Let your voice be heard. Support public policy initiatives that are seeking to: